My name is Jean Yip, and I am so privileged to be the Member of Parliament for Scarborough—Agincourt.

By now you have heard the unwavering voices from the people of Scarborough, whether in person, virtually or through written submissions. I would like to add my voice in support to ensure strong and diverse representation - Scarborough deserves six seats, while Toronto maintains 25 seats.

I strongly oppose the proposal to:

To back up my points, I include the following as my defense and recommendations:

Since 1850, Victoria Park Avenue has been recognized as the most western boundary of Scarborough. In fact, in 2012 the Ontario Commission for the Federal Electoral Districts Redistribution stated the following in its report: “The Commission’s approach to the Scarborough area was to respect the former city boundary, and to treat this area, and its six electoral districts, as an historical community.” It was the right approach then, and ten years later, it still remains relevant. 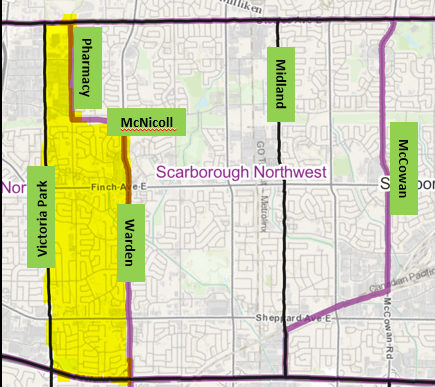 In the map below, Scarborough—Agincourt is divided into three communities where the borders end at Victoria Park: Steeles, L’Amoreaux, and Tam O’Shanter Sullivan. With the proposed boundary changes, Warden, Pharmacy and Victoria Park south of McNicoll and Pharmacy and Victoria Park, north of McNicoll (Yellow highlighted area) moves into North York. This means that under the Proposal, the communities of Steeles, L’Amoreaux, and Tam O’Shanter-Sullivan will be split between Scarborough and North York. 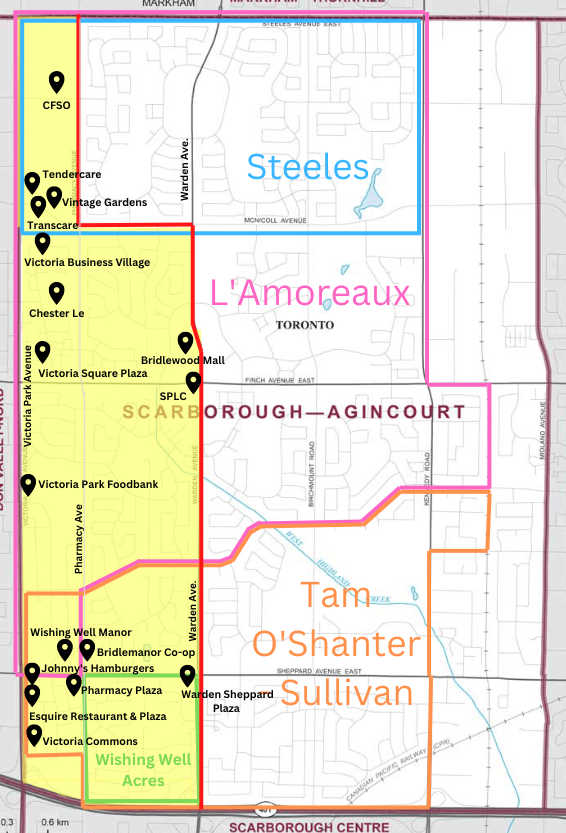 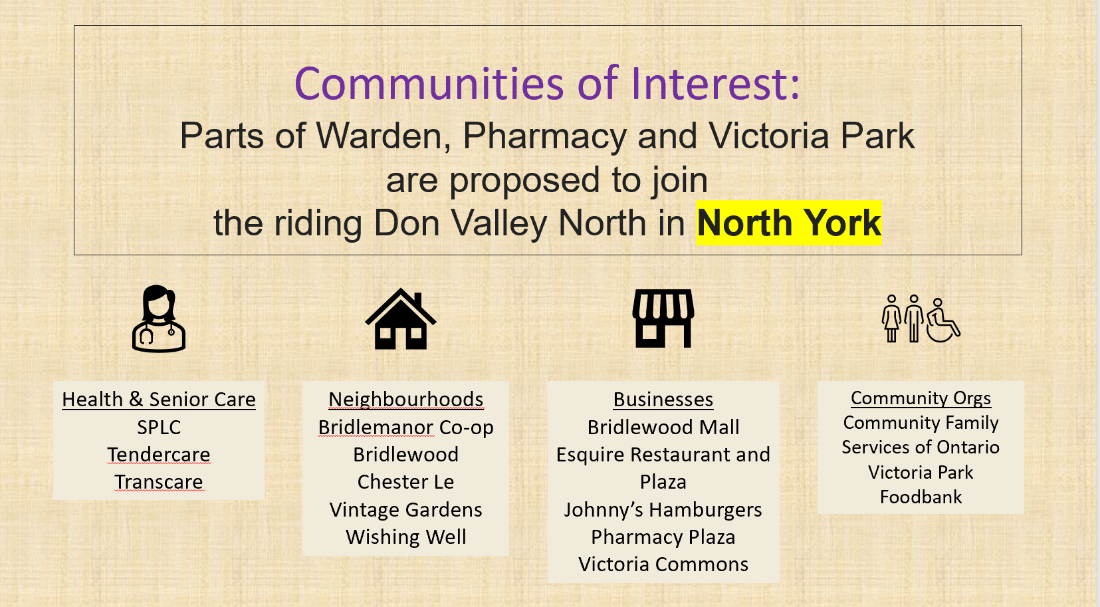 Senior Persons Living Connected (SPLC) Warden and Finch:  Is one of the key seniors’ stakeholder in Scarborough-Agincourt, providing services to vulnerable seniors from all ethnic communities. They are an active partner of the Scarborough Health Network – an organization of over 30 health and social service providers. By removing them from the riding, it impacts the network of services they have built up over 40 years with partner organizations to provide affordable seniors housing, homecare, meals on wheels, exercise and recreational programs like the adult day care. SPLC services 2500 seniors in the Scarborough area.

Tendercare located near Victoria Park Ave and  McNicoll Ave, is a Long Term Care Facility which provides nursing, personal care and convalescent care for 254 residents in a five-storey building, as well as retirement homes that cater to Chinese and German-speaking residents.  Their 4th floor is affiliated with the Scarborough Health Network helping to deal with transitional patients that need some support and saves them taking up precious hospital beds. Tendercare like SPLC relies on many of the 30 health and social service providers of SHN.

Under the new proposal, the neighbourhoods of Steeles, L’amoreaux (Bridlewood) and Tam O’Shanter-Sullivan are spilt from the rest of the Scarborough—Agincourt riding. Please see the above map with the yellow highlighted area.  Here are some of the communities that will be moved into North York:

Wishing Well Manor (Tam O;Shanter-Sullivan)  is an assisted living residence where the seniors still live independently but are some of the most vulnerable seniors.  They face language barriers and rely on Scarborough organizations that are more attuned to their culture and needs, for services and programs. Many seniors are well over 80 years old and would find it difficult to adjust to new social service supports.

Since 2017, this federal Neighbourhood Officer program has helped to reduce incidents of gun violence, increased accessibility to police, and made residents feel safer. The officers walk or bike in the neighbourhood and have over the years built up relationships and institutional knowledge of the area and community. If Chester Le becomes part of North York, it would be outside of the program’s jurisdiction. Officers in the area would have to reapply for funding and, if approved, restart in the new division.   Demand is high for this special program.  Superintendent Richard Shaw asked me, “How would this work in North York?” Every support system 42 Division Police have used as partners for Chester Le and other neighbouring areas like Glendower and Malvern are all based in Scarborough, including Agincourt Community Service Association (ACSA).

a)  be a challenge to access Scarborough resources, as there will be a lack of access to programs and supports particular to Scarborough like food bank deliveries, and food security programs that provide actual food.

b) affect partnerships with funders/donors who may prefer or be required to limit their giving to a specific area, i.e. within Scarborough.  This could even impact donations in kind, like food.

Community Family Service Ontario (CFSO, Steeles)  has built up much social networks of support for Scarborough seniors and those who are vulnerable. They are an organization that serves Scarborough and offer many services that reflect Scarborough’s diverse ethnic communities.  CFSO offers services in 5 languages.  At CFSO, they have noticed that Scarborough newcomers are more inclined to face language barriers, are more multi-generational and have a lower socio-economic status compared to  North York newcomers who tend to be younger, and already have a job.  Similarly, ACSA noticed more Scarborough seniors accessing food banks and food programs.

Bridlewood mall (L’Amoreaux) has been a community fixture since 1975 where families, and many seniors who live across at SPLC or down the road at the Bridle manor cooperative shop, buy groceries and dine. The businesses would be impacted by the costs of rebranding and with the eventual change of the postal code, costs that may incur.

Likewise, businesses like Johnny's Hamburgers and Esquire Restaurant (Tam O’Shanter-Sullivan)  have a strong Scarborough brand due to the long-time association with Scarborough. Johnny’s Hamburger is literally known and recognized as a Scarborough destination for hamburgers for 55 years.  Naturally, Tasso, the owner does not want to be moved into North York.  There are many more businesses and plazas some of which are highlighted it the map and others are not. Scarborough—Agincourt is known for the many small businesses and restaurants. 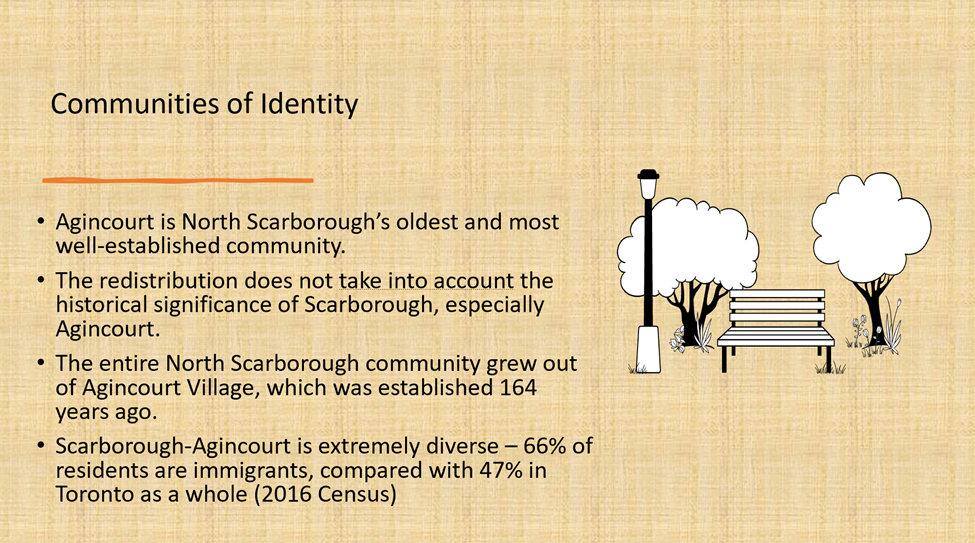 I want to reiterate that The Village of Agincourt has been in existence for 164 years and it is a matter of respect for the tradition and affection that the name Agincourt should be considered in the riding name.

Besides decreased representation for the Scarborough region in the House of Commons, the loss of one riding means that there will be fewer opportunities for organizations to apply for federal programs such as:

If the proposal is adopted, this will put more strain on the 5 ridings. Scarborough is already underserviced and marginalized, as you heard from many residents at the public hearings, with the further lack of funding, this will further perpetuate the cycle.

While Property tax rates are the same throughout the city, it is likely that property taxes would rise for Scarborough properties that are moved into North York. The rate each year is based upon the proposed City budget, what is required for that next fiscal year, and the total number of properties. Although the rate is uniform, it is applied to each property’s value assessment, which is variable. Every four years, property value assessments are done by the Municipal Property Assessment Corporation (MPAC). The last assessment was in 2016 and should have been completed again in 2020 for application in 2021, however, due to Covid that was put on pause. The anticipated new assessment will now be done in 2023.

This is how the indirect impact of the Scarborough boundary changes from Warden, Pharmacy and Victoria Park WILL affect property taxes:

While this is a redistribution of federal electoral districts, the Province tends to follow the same boundaries and municipalities will likely follow suit. If the affected part of Scarborough is moved into North York, it will become the same then the property roll number will be changed from its current “19-01” (what all Scarborough roll numbers start with) and become municipally, “19-08” (what all North York roll numbers start with). When assessors begin the property valuation process, they begin by looking at the roll number. If it starts with a “19-08,” it will automatically be assessed higher. The street has not moved, but because North York properties are valued higher than those in Scarborough, they will, by virtue of the changed roll number, be valued higher. When the uniform city rate is applied to those assessments, these properties will be paying a significant amount more. Therefore, the indirect consequence will be higher property taxes. 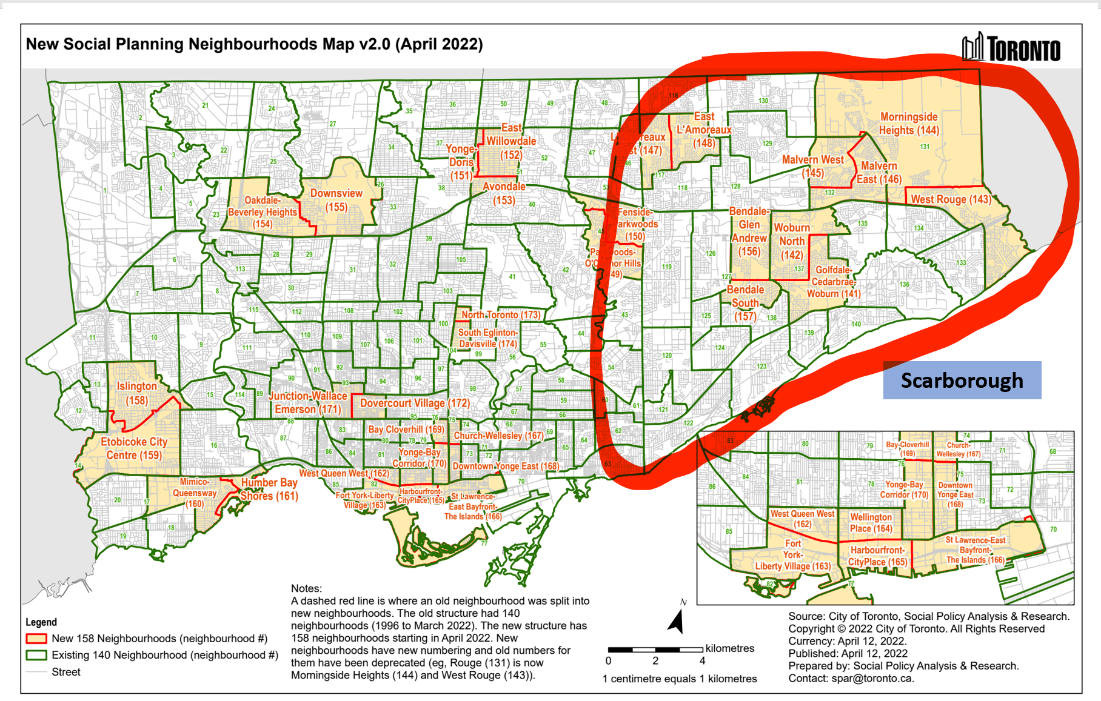 This map below shows the number of building projects in Scarborough—Agincourt. 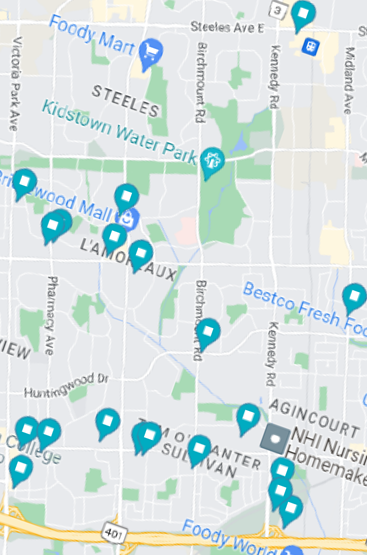 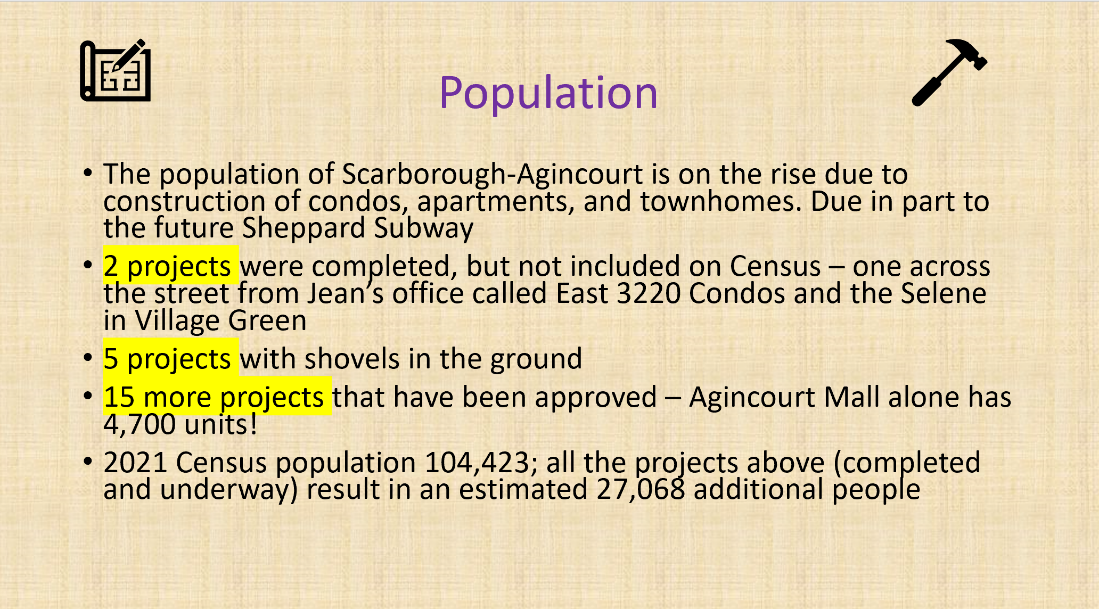 There is immense growth along Sheppard Avenue in anticipation for the subway. According to sources in other levels of government, there are a total of 30 projects, with 19,328 units using the standard multiplier of 2.2 used by the City, the projected number of people is 42,521. Given that there are larger families in Scarborough—Agincourt, one could use a multiplier of 3, resulting in 57,984 additional population with 19,328 units. Based on the population estimates for these additional projects, Scarborough-Agincourt will meet and exceed the electoral quota.

Census: The census taken in 2021, did not take into account that during a pandemic, many seniors (27% of the riding) would not open the door, language barriers, boarding house tenants, undercoverage. My son was a Census taker for the 2021 census and there were many houses that would not open the door because of COVID, or other reasons and he would try 5 to 7 times at different times and would be unsuccessful.  As a result, many people were not documented and this impacts on the census numbers.  Toronto Mayor Tory has recently stated that Toronto’s population has grown by over 62,000 in the last 5 years. In addition, the City of Toronto is the largest taker of newcomers and immigrants.

Counter Proposal of recommendations for Scarborough and Toronto ridings which includes Halton and New Tecumseth-Bradford. This is the Toronto caucus letter.

We respectfully request for consideration that the Commission:

I would like to thank the Chair, Commission members and Secretary for their diligence and hardwork. Thank you for reading to the end of this submission.